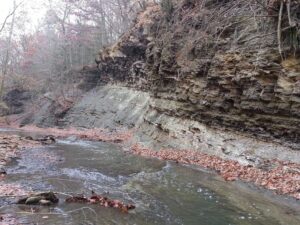 Unusual structural deformations in the Devonian Berea Sandstone, Bedford Shale, and Ohio Shale are partially exposed in Erie County (north-central Ohio). These units are deformed as anticlines and synclines along Chappel Creek (41°21’9.32″N, 82°25’23.16″W), 7 kilometers southwest of the city of Vermilion. Past studies of this area proposed Pleistocene ice movement and soft-sediment deformation during the Paleozoic as deformation mechanisms; but these hypotheses cannot explain (1) the extent of layer displacement and (2) the contradiction between the southwestern travel direction of the ice sheet and the sense of motion displayed by the folded units. Our reinterpretation uses field data and newly constructed geologic profiles to explain development of these structures.

Eight major asymmetric anticlines are observable along 3.5 kilometers in Chappel Creek between Mason and Darrow Roads. These anticlines trend in different directions (but mainly NE–SW) and are named from south to north as: Mason, Joppa, Chappel Creek, North Chappel Creek, East and West Bailey, and South and North Darrow anticlines. Structural geologic cross-sections through these anticlines show that the folding occurred in Devonian Plum Brook–Berea formations and extends as deep as the top of the competent Columbus and Delaware Limestones.

The Mason, Joppa, and Chappel Creek anticlines trend NW–SE and are tightly folded with a steep or overturned northeastern flank. Development of these tight or overturned folds, and a change in trend of the anticlines from NE–SW to NW–SE, is caused by unusual stratigraphic thickness variations in the Berea and Bedford units. Locally thick Berea in the syncline to the north of the Chappel Creek anticline constrained the harmonic movement of the layers during the folding. This thick Berea acted as a stratigraphic obstacle and increased compressional stress on layers encountering the obstacle during the folding and resulted in development of a tight and overturned anticline. Consequently, orientation of the fold was changed from NE–SW to NW–SE with development of a dextral shear stress zone and transpression to the west of the obstacle.

Ohio Shale in the core of these tight anticlines is faulted, with thrusts flattening at depth and becoming horizontal above the Columbus and Delaware carbonate units. Remaining folds along the creek to the north are low-relief anticlines and synclines trending NE–SW, asymmetrically verging towards the northwest. Analysis of the geometry and other structural features of the folds indicates that these anticlines formed by tectonic stress during the Paleozoic, and it is unlikely that these folds were created by glacial movement or isostatic rebounding during the Pleistocene. Preserved and undeformed fine sedimentary structures like ripple marks and cross-beds in the Berea and Bedford units indicates that the regional deformation and development of folding and overturning occurred after lithification. The soft-sediment deformation features (seismites) in convoluted beds within the Berea and Bedford units were formed during the sedimentation of convoluted beds by ground motion caused by seismic events. These convoluted beds and their accompanying normal layers were folded during later regional deformation.

The deformation of the Ohio Shale, Bedford Shale, and Berea Sandstone units by advancing Pleistocene icesheets is unacceptable because of the absence of the following physical geologic evidence for glacially deformed bedrock units: (a) lack of major fractures and crushing in the deformed layers; (b) lack of glacially derived material within the deformed beds; (c) depth of the deformed layers which is much greater than the accepted depth of bedrock deformed by glacial movement; and (d) contradiction between northward sense of motion in deformed beds and southward direction of glacial movement in the study area.

In summary, steep or overturned layers and folds in the stream cuts of Chappel Creek were formed by SE–NW-directed, Alleghenian compressional tectonic forces later during the Paleozoic, with a few exceptions where a change in fold trends was a result of localized variations in lithostratigraphic thickness. In all cases, folding occurred after the settling and lithification of the deformed sequence, rather than during sedimentation, and Pleistocene glacial movement was not the cause of deformation.